After making some last minute finishing touches to our stand the night before, we had a minor panic on Tuesday morning because our main display on the Eirich mixer stand wouldn’t operate as required.  However
a quick swap of two wires rectified the problem and we were good to go.  This unit was an Eirich RV12W mixer of 400 litre capacity that also featured a tipping head to make cleaning as easy as possible.

Over from Eirich was Dirk Heuer, one of the technical sales guys and a concrete specialist.  Like the rest of us Dirk was happy to be out in the sunshine and looking forward to a well attended show – just as well because the night before he’d taken a ride from Manchester airport to Buxton with a taxi driver we nicknamed Dick Turpin (the highway robber). 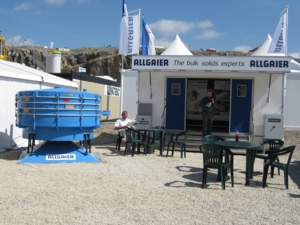 Down at the Allgaier stand were Armin Heussler and Gerd Stölzner, two more German colleagues amazed by the British weather.  As Hillhead debutantes, neither knew what to expect in terms of visitor numbers and interest level, but after day one Gerd commented that despite only a few enquiries, all of them related to real projects with investment behind, so he was satisfied with the quality.  Brand new for the Allgaier tumbler screen we had the “G-section” sealing for external screen decks.  Made from silicon, the main advantage of this sealing profile is that it can be wrapped around the screen frame and held in place without glue, therefore doing away with the flat gaskets normally glued to the cylinders above and below the screen deck, saving time and money (More news coming soon).

Wednesday was similarly warm and dusty but naturally most people’s minds were on the World Cup matches scheduled for later that day, and consequently we noticed less visitors circulating our area of the quarry.  Several hours later with England already safely through to the knockout stage, and Dirk on his way back to the airport (this time in a pre-booked taxi at half the price of his inbound one) we learned that Germany would be England’s opponents in the last sixteen of the tournament, which naturally was the main talking point of the evening for these English/German colleagues!

Despite the weather turning grey and wet in the morning, Thursday still seemed fairly well attended and we met several familiar faces from client’s in the building materials and minerals industries. After a rough ride in the last two years, the general feeling seeming to be one of cautious optimism, which was good news to hear.

We're not around right now. But you can send us an email and we'll get back to you, asap.